Off to the Mountains

Upon returning to Palugo after our month-long expedition, we jumped right into working on group projects. Hannah, Whitley, Aisha, and Zoe made a beautiful new dishwashing station for the kitchen with Tupak. At the end, they crafted a spiral mosaic into the surface. The rest of us worked on an ongoing project consisting of making an entrance to the upstairs of the Bodega (one of the main buildings on the farm), that is wheel chair accessible. We cleared out thorny bushes, built a weaving path, and made a bridge leading to the entrance.

A couple of days after we got back, we had a “Tupari.” A Tupari is a time when the instructors give us space to have a meeting independently. Every time we have one, a lot of important things are said, we work through issues as a group, and afterward the energy feels clearer. During this particular Tupari, the instructors left before dinner, which is earlier than usual. We were eating in a circle around Harry, who was lying on the couches and not feeling well, when Whitley exclaimed, “What is that?!” She had spied on old keyboard on a top shelf. She proceeded to take it down, plug it in, and turn it on. All of a sudden, a song started playing—one of those little recorded riffs that are always on electric keyboards. Because we hadn’t heard recorded music in so long, it sounded like the funkiest thing we had ever heard. Everyone started dancing, and for the rest of the night, we played songs from the keyboard with the volume blasted. It was an epic dance party. And for dessert, we had fried pineapple with warm chocolate sauce.

In the beginning of our second week back, we went out on our solos. Each of us were led to a spot on the farm. We brought only a sleeping pad, a small tarp, and our water bottles (some of us wore most all of our warm layers). For two and a half days we sat watching the circles of the sun, the moon, and the stars. Sometimes we were still and listened to the silence, other times we sang and talked to ourselves. At the end of the time, we came back and gathered together. Everyone looked different. Everyone was shining with a magical energy.

Here is a poem by Griffin, representing his feelings and experiences during his solo:
It’s essential to develop balance in life.
Balance between doing and just being,
Balance between being alone and being with others,
Balance between feeling hungry and satisfied.
Productivity is as valuable as stillness,
Solitude is as fulfilling as community living,
Fasting is healing just as eating good food.
Through life, we find balance between all things.

A poem Hyim wrote while we were on our paddling expedition. I watched him write it while sitting on the rocky shore of the river:
Fast rushing slowly flowing
The essential essence of our being
Every caving memory into time
Having only one goal
The quickest most direct route
From source to sea
That’s where you will rest

Here is a little story I wrote during my solo, when I was up late at night and thought I saw something large moving through the trees:

It was a dark windy night. One of the eucalyptus trees started to sway back and forth, its leaves shimmering. It stretched its trunk, reached its branches up to the sky, and stomped its roots. It had turned into a eucalyptus tree giant. It snuck around the outskirts of the farm, hidden in the shadows, until it reached the place it had grown from. There, it spread its roots once again. No one ever knew.
Right now, we are preparing to leave on our last expedition together in a couple days, spending two weeks climbing in the beautiful mountains. We look forward to sharing with you about this experience when we return!

How many semester students can you fit in a truck? Our last days at Palugo were spent by celebrating one another and the beautiful pl... 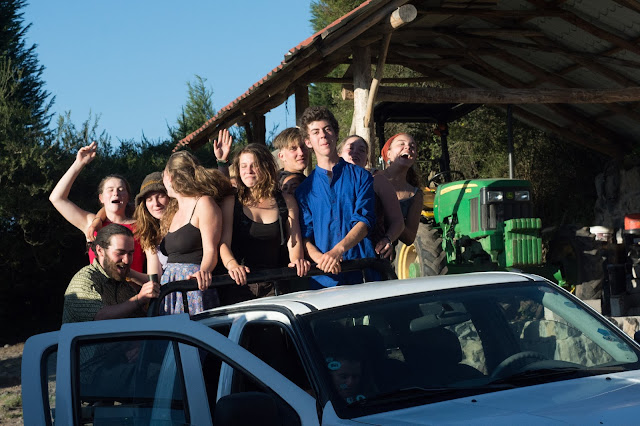